In this article, we’ll talk about VLANs (Virtual LAN). It is a buzzword (we should use it) in today’s networks, and sometimes we don’t understand why we use this concept.

Today, you will understand why?! 🙂

This is a simple example of a switched network of a company. You can see that we have many departments. In fact, in real networks, you’ll find more departments than those represented on this architecture, and of course, a lot of switches.

Do you think that it’s a good topology design? I don’t think so, because we can ask a lot of questions when we see this types of topologies:

In fact, this topology is source of many problems. When a computer sends a broadcast frame on the network, all devices connected to this network will receive this frame, and this happens because we have one broadcast domain.

Before we continue, I want to make sure you understand well broadcast domains. I am sure you are familiar with it, just to refresh our minds!

Note that broadcasting frames also happens when a switch don’t have the MAC address destination of the frame in his MAC Address table.

You probably understand that the more frames are broadcasted, the more performance of our network is affected. It means that will take more time to access a server on the network for example.

And finally, it is really hard to deal with security in this type of architecture, you can filter MAC addresses but it is not secure, because if you take a look at security in layer 2 networks, you’ll find that MAC spoofing is the first threats you have to deal with.

Is there any solution to solve these problems? Yes, it’s VLANs.

Look how we can improve our design of architecture to solve all these problems. 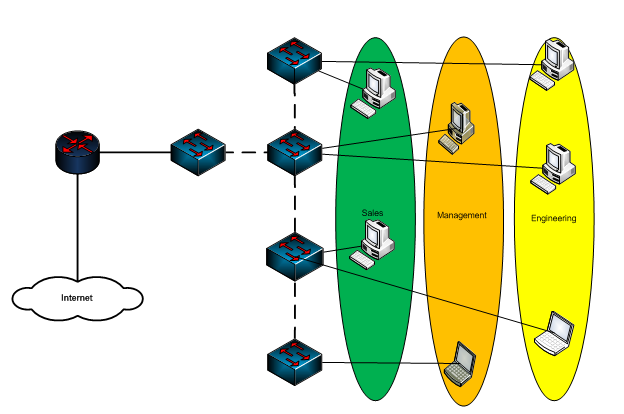 You can’t see all departments, but I think that you got the idea.

Here are some advantages of using VLANs:

That’s all for VLANs. Now, I am sure that you know why we should use this concept. I hope this article was helpful for you, and if so, just leave a small comment!!